What is a good sailing school? I would say, it´s a place where you won´t just be taught how to pass an exam or how to get a certain certificate, but where you can gain skills both in sailing abilities as well as in seamanship. It certainly depends on the skipper you´ll get: And I can say that I again was so lucky with my skipper during the SKS (equivalent to the RYA Coastal Skipper) a few weeks ago. (You may read the practical sailing education here and the examination day here). Dietmar, his name, told us right from the beginning what his intentions have been: Teaching us how to sail and how to act as a thorough skipper. And yes, there´s an exam we want to pass.

But that was his smallest concern. He wanted to teach us stress-free sailing without yelling or bitching, instead, how to sail in a calm, confident and safe manner. Here are the four big learning I gained during this 6-day sailing school-cruise on an X-442 yacht: The best marina berthing maneuver ever, casting off stress-free, a very quick Figure-8 alternative and last not least the most simplistic last minute maneuver. The best thing: It is possible to do all these maneuvers single-handed.

We all know the classic landing when it comes to go alongside a pier: Taking aim with the bow, reducing speed as much as we can, move slowly alongside and reverse gear to stop the boat. Now the stress comes into play, because somebody (mostly the wife of the skipper or – worse – an uneducated guest) has to jump to the jetty to head off the boat with a rope. Oh dear, that´s load, there´s a lot of yelling and – perish the thought! – what if wind blows from the “wrong” direction?

Here´s the problem: Anchor, Bow and pulpit will be put dangerously close to the pier. There´s a whole variety of possible damages lurking. Another problem is, that the skipper will have to be very, very precise at helm and throttle. Which is not a problem for somebody knowing his ship inside out. But who does? When wind blows, drifting will have to be taken into consideration. Last but not least, the view from helming station at the stern to the bow is restricted and often obstructed. If the berthing space is too narrow, a safe landing won´t be possible. Not the best premises, aren´t they?

Well, here´s the solution: You just have to reverse gear. Landing stern ahead is fast, convenient, safe and absolutely stress-free.

This is how the skipper will perform this maneuver:

And that´s it. Landing stern ahead with just one rope. You have now all the time in the world to have the rest of the ropes applied accordingly – engine still running holding the ship tight to the pier.

These are the advantages of the maneuver: First of all, it´s totally stress free. Just you at the helm with a splendid view and only one single rope. No jumping to the jetty, no yelling, no hectic. You have a perfect view over the stern, distances are very easily assessable. This maneuver can be done single handed. The best: You can land the boat even into very narrow berths alongside a pier where forward would´nt be possible at all.

If there´s the need to cancel the maneuver, just put ahead gear and you will instantly have flow at the rudder to be able to act quickly in case of emergency. The other way round would take a lot more time since there´s no flow from the screw in reverse so the ship will need a certain speed to answer helm. You want to see how that works? Here´s a video of landing a 44 feet sailing yacht stern ahead with just one single rope: 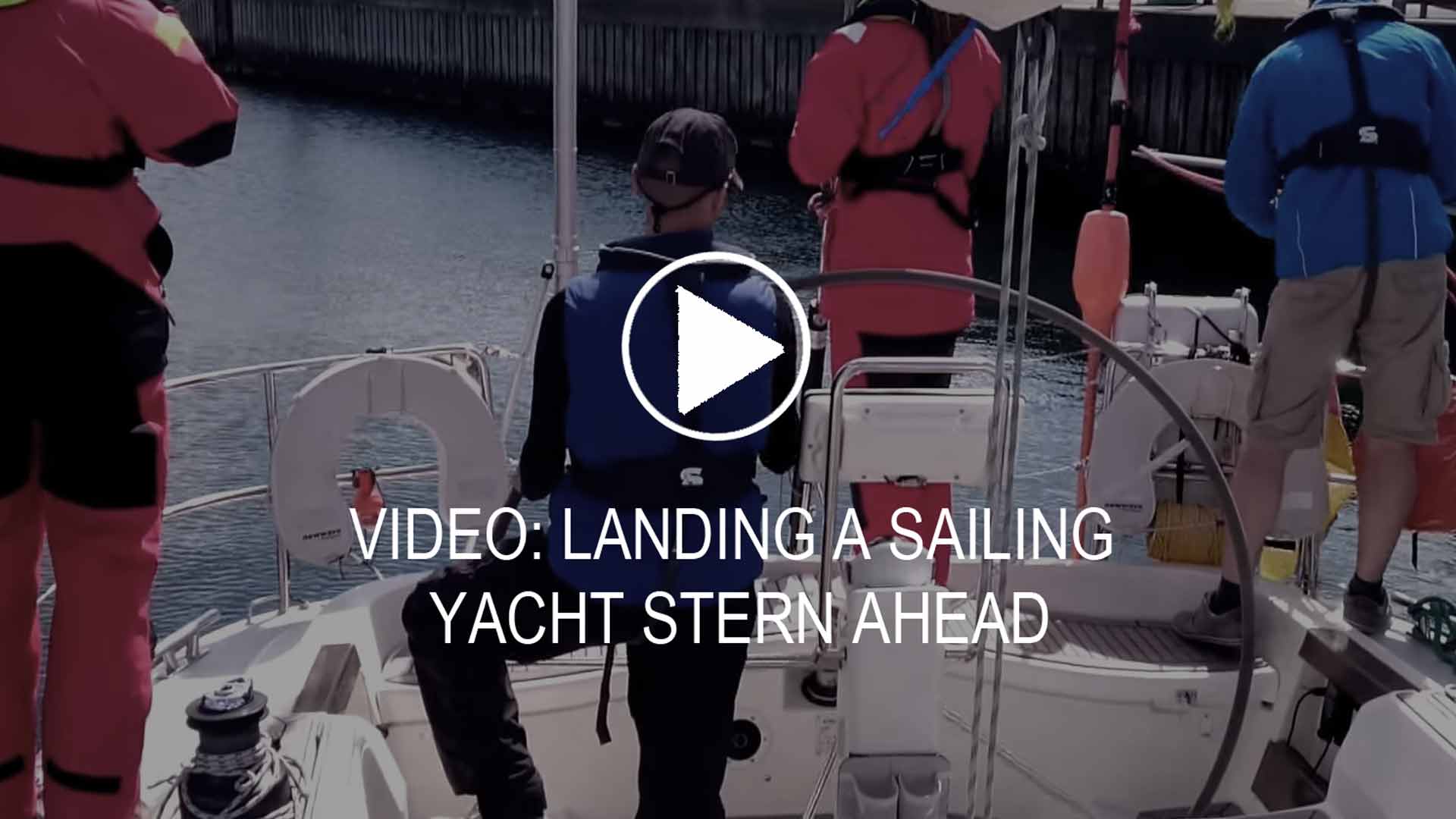 I would say it´s a perfect maneuver for small or inexpert crews. You won´t have to employ a whole armada of people to bring the ship to a standstill. It´s stress free, elegant and perfect for showing off. Landing stern ahead can be done in every wind situation, no matter from where it will blow. By putting the boat in a stable condition with the engine and holding her in position you may take any time you want to apply all ropes and springs ropes.

Caution tiller-steering: Reversing puts enormous forced onto the rudder so you ought to hold very, very tight to the tiller to avoid rudder-damage.

Nevertheless, it´s a perfectly beautiful maneuver. Think of it: I have never had the responsibility for a 44 feet yacht – and I was able to safely land her in a matter of 3 or 4 practicing rounds.

Easiest Way for Casting Off

As well as it is the case for landing, the classic procedure for casting off when alongside a pier is inching into the spring. Of course, you may give the boat a push or just let her drifting away, but there is a much more elegant and convenient way to cast off.

Problem with standard maneuver: Pulpit, anchor or bowsprit could again hit the pier when the stern will be going away from the pier side first. Again, there´s low visibility from stern to bow and not less skippers miscalculated the moment to let loose the spring rope and steam away. If you are sailing alone, the crucial last rope to be put off is at the most remote place from the helm, where you will have to be steering and controlling the engine.

Solution: Let physics do it´s job. We will be casting off like magic (again) with a seaward stern rope. This will enable us to start the cruise bow first, avoid reversing and cast off fast and neat.

This is how the skipper will do it:

The advantages: This is casting off with a guaranteed success. You will be able to perform this maneuver in any circumstances no matter from where wind will be blowing. You can cast off bow first, adding safety because you have flow at the rudder from the screw at any time. That´s different when casting off stern first. Again, this maneuver could be done single handed (if the clamp for the seaward stern rope is within comfortable reach. There is now hassle with all kinds of ropes since you may take in all (except the stern ropes) before casting off.

Oh, how I loved it to start a day like this!

I love doing the MOB maneuvers since I´ve learned how to perform the Figure-8. It´s fun to do it because there´s action, work at the winches and you have to be precise at both helming and assessing distances. Though I hope I´ll never be forced to apply my knowledge in real life rather than taking on board a fender again. When doing the Figure-8 I was able to rescue the buoy after 1 to 1.30 minutes. Pretty fast, isn´t it? But there´s even a faster maneuver. The Quickstop.

Problem with Figure-8: There might be situations when this all-time classic isn´t the maneuver of first choice. Maybe there´s not enough room, you are alone and have nobody to work the sheets or if something (the weather?) forces you the react very, very quickly.

Solution: The Quickstop will return the yacht to the spot of the MOB within a wink of an eye and without allowing too much distance to be put between you and the person in the water.

This is how you´ll perform the Quickstop:

You should now have performed a full circle, have reduced speed to near zero and be positioned right next to the person to start the recovery efforts.

Advantages: The Quickstop is a very fast maneuver requiring very little space. It can be performed with just one person on board and needs no big preparations (given that the boat is sailing close hauled). On the contrary to the beloved Figure-8 there´s no working at the winches needed. But it´s a maneuver suitably only when sailing close hauled or in a close to beam reach.

If you ask me personally, I like the Quickstop but I will stick to the Figure-8. Why is that? Because I have more time to plan a precise run towards the MOB. With a Quickstop, there is no such time. I will have to know my boat very intimately to have it stopped right at the desired position. With a Figure-8 I will first put some distance between me and the person to have a perfect run into the wind to the rescue. I really didn´t like performing the Quickstop, I found it was too much of “music” and hectic associated with that maneuver. But that´s surely a question of practice.

And here´s what I think too: With every single cruise you are going to cast off to, there should be at least one MOB-trial for everybody helming the ship. No matter if Figure-8, Quickstop or just simply MOB with engine is practiced.

When two ships are meeting each other in open sea or on waterways, we do have collision prevention rules regulating how everybody ought to act accordingly. Who is the privileged vessel, who will have to change course – it´s a clear set of rules every good seaman should have knowledge of. But there are so many occasions when simply the give-way vessel won´t change course. If signaling won´t do the job, there´s one last thing to do when acting as privileged vessel: Avoid collision with the so-called last minute maneuver.

Problem: “High noon” at the sea – big time panic! Especially in cramped waterways. As a skipper a ton of questions and decisions are battering upon our heads. Where to go? Port? Starboard? Luffing, veering off? Skippers can be made unable to cope at an instant. What the hell is this “last minute maneuver”?

Solution: Well, it´s easy as ABC when sailing close hauled or in a close reach. We just need some speed. And a courageous helmsman.

This is how the skipper will act:

Advantages: This is so simple, I cannot find words. It does perfectly work when sailing close hauled or on a close reach. Yes, there´s some stress in the rigging but that´s far better than having your bow slammed into another vessel. Even during the full circle you will be able to decide to stop circling, veer the sheets to have the yacht sailing at a different point of sail when going back to initial course isn´t desirable anymore.

This is what I´ve learned during the 6 days onboard MERENNEITO of Well Sailing Hamburg. 200 miles of perfect sailing with skipper Dietmar and Andrea. It´s a great feeling having passed the SKS-examination by having enjoyed the hard yet perfect drill of skipper Dietmar. He was pushing us, adding a new challenge every day and giving room for trying, being creative and seeking own solutions (even if his solutions proofed superior in the end).

By teaching us how to land, cast off or do a MOB rather different as it may be taught by the book he achieved his goal: Putting a little bit of seamanship into us lubbers and besides, making us pass this exam and get the certification.

I hope one or two of the shown maneuvers are of interest for you.