As with every human being, I love to watch a thunderstorm form, experience the force of a gale or strong winds strolling at the beach in autumn or just watch a weather documentary on the Discovery Channel. Weather fascinates – heavy weather me and the extreme forces of nature have always inspired humans, filled them with respect and sometimes awe and fear. It should, because still today weather is the mightiest thing on earth, able to crush everything.

As a sailor, especially on a sailing yacht which is driven by the power of nature – the wind – it is vital to understand how the weather-systems work and in case weather patterns leave their narrow band in which we find the favorable it can soon be a question of sole survival of being able to cope with it. Heavy weather sailing knowledge and abilities are vital. So, apart from the fact that my own yacht´s keel will see water again not until 2017 I did read into that topic very intensively and want to share my Top 5 books on foul weather with you, dear reader.

5 Books on Heavy Weather Sailing for Skippers in being

There´s a vast variety of different books available on that particular topic and as with everything one might get lost in choosing and picking the “right” ones. I did so by thinking of what would be of interest: I first wanted to learn about basic stuff. How does weather form? What is weather and what drives it to become heavy? So I particularly searched for books with a focus on that specific theme. Other books I chose because of their emphasis on the ship´s factors such as seaworthiness and finally it was about the sailing abilities as well: How to deal with different foul weather situations, how to avoid them or just safely ride them out. Here´s my (certainly incomplete) list of the five reads I found particularly useful for skippers and skippers in being. At the end of this article you may find a link list to Amazon if you´d like to buy them right away.

The “Complete Yachtmaster” ist the standard reference book for all yachtmasters in being. The worldwide success of this book is justified – filled with all kinds of information it covers virtually everything from A to Z to be known for a thorough sailor. Started in 1994 this book has been updated not less than eight times up to now and leads the topsellers lists. Since I am right now in my own yachtmaster-courses as well this books serves quite well for answering all kinds of questions and to deepen the stuff we get to know rather shortly during the classes.

Well, I might mention that this book is not a special one on the heavy weather sailing topics solely, but a good chunk of the 300 pages do deal with storm tactics, behavior of the seas and weather systems in general: There are three chapters of special interest in this area, like the one on “Fog”, another one on “Poor Visibility” and the one dealing with “Heavy Weather Sailing”.

The book is focused on preparing the reader for his RYA Yachtmaster exams, so one cannot expect to get a detailed insight. Instead, it deals with a rather general oversight to lay the basic groundwork for the sailor in being to ask the right questions for his ongoing education.

Which brings us to the all-time classic and the absolute must-read when it comes to heavy weather sailing: The 370 pages thick “bible” on foul weather-sailing initially written by Adlard Coles. He was an Officer in the British Navy and later on a very successful sailor and multiple regatta-winner who actually died back in 1985. His first book – the first one ever trying to deal especially with heavy weather sailing for sailing yachts – has been published in 1967 and has been updated since then three times by Coles and since 1991 in collaboration with Peter Bruce six times.

What I really liked about the ship was the very practical and scientific approach to the topic of seaworthiness of a yacht with different designs. The reader gets to know which constructional aspects of a yacht have influences on her stability or rigidity. Which hull behaves how in foul weather? Should the old school full keel-boat be preferred over an IOR-fin keel yacht or the modern flat-hulled deep-keel? Sailing plans, different kinds of riggings and technical aspects like reefing or anchoring are depicted very detailed and explained comprehensively – alongside some very good and clear made graphics.

Also a highlight are nineteen storm-stories ranging from the all too known notorious Fastnet Race, the Santander Regatta, Volvo Ocean Race and the “Weatherbomb”, Queen´s Birthday storm of 1994. These stories do recap the lessons learned and show how the different yachts, the different storm tactics and weather behavior changed the outcome of engaging the heavy weather situations from lucky survivor to capsize and tragic death by drowning. This is just an absolute must read!

This one is a pretty cool book. A very quick read because Tom Cunliffe´s “Heavy Weather Cruising” has merely 60 pages. But behold, this book can teach the yachtsman a lot! Written in 1988 it can be seen as the much shorter version of “Heavy Weather Cruising”. It does not dig too deep into the details but comprises the whole topic of foul weather sailing from “Wind and Wave” to “Fit for the Sea – a seaworthy Boat” and the whole stuff on the different tactics in avoiding and mastering rough weather and storms at sea on a sailing yacht. 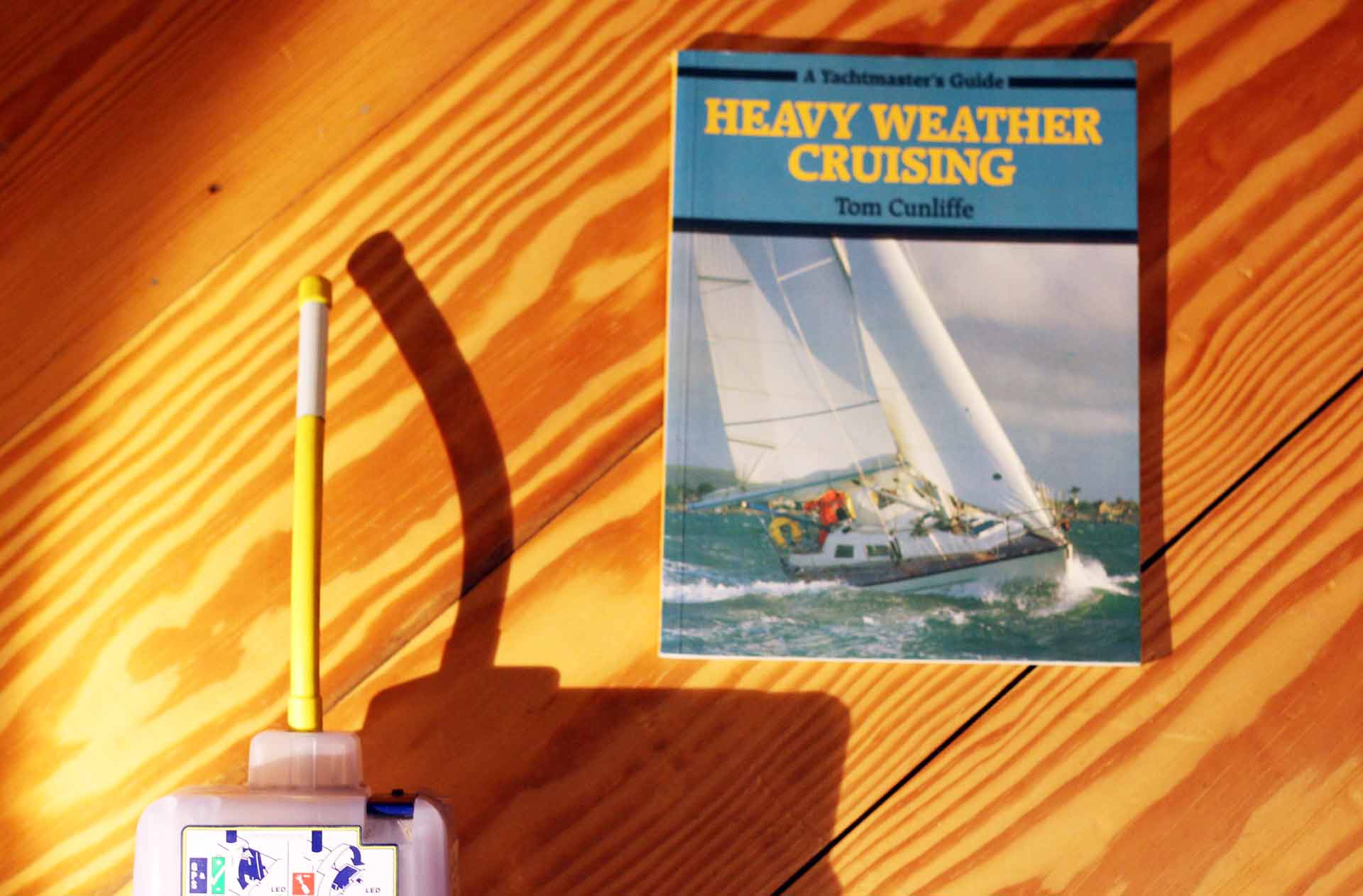 The book is excellently written: I did enjoy to read Cunliffe´s rather mellow style of writing and his advices, sometimes delivered very funny and jokingly. But when things get rough, his tone can get pretty serious to grave in order to fix his important messages of things to do and things to strictly avoid inside the reader´s brains. All in all this is an exciting and worthwhile read.

What I did like most has been his chapters on how to avoid foul weather in the first place: Passage planning, weather forecasting and shelter seeking has been of much interest. As well as his very plastic depictions on how to rig a yacht for a storm, how to brace for heavy weather and how to set the best escape courses.

Meteorological Masterpiece: Dietrich von Haeften “Storm – what to do?”

Which brings us to the next book: Because, foul weather does has it´s signs. It won´t hit you instantly from nowhere but can be anticipated, forecasted and thus avoided. So I chose a German writer called Dietrich von Haeften and his 1992 book “Storm – what to do?” (“Sturm, was tun?”). This book deals a lot with the meteorological aspects of weather-systems evolving from low-pressure fronts to the very destructive depressions, cyclones and other violent forms of heavy weather.

I really got to understand the whole topic of low pressure/high pressure, development of wind streams between them, clockwise/anticlockwise wind directions, cloud formations and forms of precipitation after reading this book and having the clean, solid but very explanatory graphics for the first time as a whole. And that´s a very interesting thing, producing light bulb moments virtually on every single page. If this book is not available in English, I would like to urge strongly to do a research on a similar book in your mother tongue dealing with weather in such a detail. Because if you understand what makes the wave and why it is that high it will make you stronger and more self-confident when confronted with it.

Another emphasis is his focus on how a skipper should rig both ship and crew for the storm: Preparing the ship both above and below deck for the storm, creating a watch system, dealing with seasick crew members and all that personal stuff which has a big impact on how a sailing yacht might succeed in a storm. The most seaworthy boat won´t make it without an able crew. That´s for sure.

Last but not least – after having not less than 4 non-fiction books – I was very lucky to having found “Saling in Thunderstorms” by Millemari. First of all it deals with thunderstorms exclusively and I found it to be of particular interest because since me and SY OLIVIA won´t be sailing Blue Water in the near future I think in the Baltic Sea finding myself in the midst of a thunderstorm is the far more probable event that having to shorten sails and ride out heavy gusts in a gale force storm.

“Sailing in Thunderstorms” is a compilation of 40 stories of skippers who have experienced thunderstorms in various oceans of the world: From the Pacific to the Med, from the Baltic Sea to the Bavarian Lake of Starnberg. What I particularly liked has been the quick read – no story is longer than an ordinary A4-letter would be, thus making the whole book diversified by featuring so many different stories, styles of writing and – above all – thunderstorm-situations.

The stories are told quickly with an emphasis on the tactics applied by the skippers to either flee or ride out the storms written from their personal points of view. Skippers who have been rookies and confronted for the first time with rolling thunder at seas and are also featured as old salts are. Really good is the “Debriefing” with a short, 1 to 5 summary of lessons learned after every single story. It´s a mere personal and blog-like style which I really liked. If you cannot read German I want to urge you to do a research online for blogs of skippers telling their experience with foul weather, their respective tactics and the outcomes.

My next Steps of becoming a Yachtmaster

So, after having read these books (some chapter multiple times to reinforce my knowledge) I feel a lot more confident of facing the powers of Mother Nature on my own yacht. Well, I have certainly no desire to having to ride out a gale force storm, to heave-to or sweating to avoid lee-shores but I do feel a more profound comprehension of weather-systems, boat-behavior and heavy weather tactics. That said – next month my Pogo 40 four day heavy weather cruise from Bremerhaven around Helgoland and back can come. Yeehaw!

This is a Link to Tom Cunliffe “The Complete Yachtmaster”

Dietrich von Haften “Sturm, was tun?” (only in German)

And here´s the Millemari “Sailing in Thunderstorms” (only in German)